So take this one; "what if the stars gaze back?" Simple and unique to be sure, and also a bit quirky -- it would be right if its story was quirky too, It's imaginative, so a fantasy, with magic and sword-fighting, and flying pirates and witches. It might be a bit cheesy, but it would also be funny, exciting and sweet. 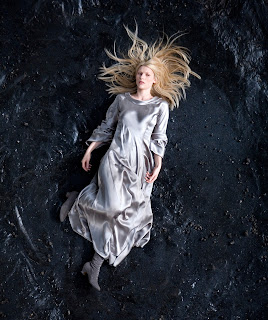 Stardust is all these things and more. Stars do gaze back, and what more, sometimes they accidentally fall. (Shooting stars!) One star named Yvaine (Claire Danes) is unceremoniously knocked from the sky by a large gemstone set in a necklace when the dying king of the realm of Stormhold sends it flying into the night, telling his three sons that one must retrieve it to claim the throne. As the star falls, three sister witches see it, and one goes out to find it, so they can consume the heart and be young again.


In 1800's England, in a small village called Wall (so named for a mysterious wall on its border), a boy named Tristan (Charlie Cox) is trying to win the hand of his beloved, the beauty of the town, Victoria (Sienna Miller). They see the star falling, and make an agreement; if Tristan can bring the star back to Victoria by her birthday in one week, she will marry him; if not, she'll marry that pompous rich fellow Humphrey (Henry Cavill, and almost totally, hilariously, unrecognizable). Tristan is determined to succeed, but no one ever crosses The Wall. Once that little hurdle is jumped there's an unexpected problem; Tristan had no idea the star would be... a woman. And she's not too keen a being a birthday gift.


If there is one movie that just screams "high-flying, full-throttle, incredibly fun fantasy adventure" it would be this movie. The story, based on a novel by Neil Gaiman, is wonderfully complex for a lighthearted fantasy, with basically three plot lines running simultaneously, and intersecting every now and then. Tristan and Yvaine, on a time limit, hurrying towards the wall, the witch Lamia, Michelle Pfeiffer, growing older and uglier the more magic she uses, in pursuit of the stars heart, and the youngest prince, Septimus, Mark Strong, a likable bad guy if there ever was one, in pursuit of her necklace. There's also a pirate with a fearsome reputation, Robert De Niro being unpredictable, a kidnapped princess, ghosts for comic relief, and what fairy tale would be complete without a unicorn?


Acting wise there's nothing special, in spite of the all-star cast, which lesser-known Charlie Cox as the unlikely, awkward hero holds up against very well. Claire Danes' sarcastic heavenly being is a little strange at first, but she grows on you. The two together don't click as well as they should, which is slightly disappointing, especially when I realized that a sweet moment between girl and mouse was just as romantic as a sweet moment between girl and boy. Still, I hardly noticed that enough to care; there's so much more to occupy your thoughts.


The quirky plot unfolds briskly and smoothly from beginning to end. Aided by active, sweeping cinematography moving from place to place and scene to scene seamlessly, tying everything together with style. It also showcases some beautiful, middle-earth-like locations, and some epic, magical sets. The humor is hit and miss, and as the rating says, some of it is mildly rude, but it is usually at least mildly amusing, and sometimes it hits and is downright funny. The cheesy-ness is sometimes laughable as well, but in a purposeful way. (Self-deprecating humor makes everyone like you!) The action is swashbuckling at times and magic-y at times, and is good and exciting all the time.


Stardust is the practically the definition of it genre. Yet I consider it to be extremely original. It succeeds in telling a fun adventure story and in making it funny, romantic and fantastic. It's very light fare -- never going deeper than about, oh, two inches, but it lightheartedness also makes it endearing... and cheesy. Still it has its "serious" moments and its fantasy action and violence. It may go overboard, but it does it whole-heartedly, making you want to join in on the craziness, the fun, the giddy enthusiasm. And with a unique, memorable story is told this well, I have nothing else to say except jump on in.