Everyone's favorite British super-spy is getting a fresh start. After failing a very important mission due to being accidentally shot by a fellow agent, Bond "enjoys" being dead for a while, but James Bond can never stays dead for long. When he hears that MI6 has been attacked, he dutifully returns to lend his now significantly diminished skills to M, who ignores his failed evaluative tests, reinstates him, and puts him right to work. Because if agent 007 can't save Britain, no one can. 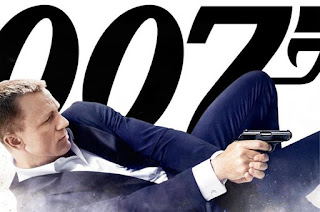 Sadly, despite his best efforts, our hero doesn't save much of anyone or anything this time around - besides himself by the suave skin of his teeth. Yeah. It's one of those movies. It takes two and a half hours to accomplish a plot line that could have been squeezed into a tv show. But as technically unnecessary as about an hour of the movie might have been, I didn't mind it one bit; I was too busy enjoying myself with the spectacle.

Visually, at the very least, Skyfall is a masterpiece. This whole film is a feast of light, shapes, and colors. Strikingly beautiful, unique locations and sets abound, and are displayed with style, completely free of cheap effects and frills - a great reflection of the persona of the film's hero. And I just love it when fight scenes are actually choreographed. Never take the little things for granted.


Judi Dench as M is just as she always is and always should be, and I'm looking forward to more of Naomie Harris and Ralph Fiennes. Daniel Craig has never really fit my idea of how agent 007 should look, but I will give him that he can definitely act the part. So well if fact, that I can forgive his less than perfect "007" appearance. He is nearly overshadowed, though, by the villain. It's not Javier Bardem's fault - he simply can't be a normal, forgettable bad guy. Mr. Silva is very up-to-date, and has everything a villain needs these days. Understated creepy looks, a calm and cheerful disposition, sympathetic back-story, and even knew to include in his evil scheme that important point where you get captured on purpose and held in a glass prison for a while.


Oh yes, and one more - they put Q in this movie. Played by Ben Whishaw. He looks like a hipster and is undoubtedly the best addition to the movie, as were his scenes of bantering with Bond. I give his hair and 11 out of 10, and the epic-ness of his speaking voice - while a little nuanced - rates squarely between Benedict Cumberbatch and Richard Armitage. This is all high praise from me, for anyone who may not know.


But here's what really made this movie: the references and illusions to the classics of James Bond films. "My name's Bond, James Bond" may be cheesy beyond compare in any other movie, but here it's necessary. He's gotta wear the tux too, and the martini's gotta be shaken. These are the moments that make me happy and these are the reasons I watch these movies. And director Sam Mendes was happy to give us these things plus some. He must know that sometimes going back to the classics can be just as fresh - or even fresher - than scrounging up a weak, but "original" film. Especially when it comes to a certain British secret agent.

"It is a truth universally acknowledged that a rich man in possession of a large fortune must be in want of a wife."

So begins Jane Austen's classic novel, Pride and Prejudice. What is it about? If you said it was a romance about a proud man and a prejudiced woman you wouldn't be wrong... just missing out on a few points. If you said that, I would assume that you had only watched this 2005 version of Pride and Prejudice, and liked it. And while I really can't say you're "wrong" for liking it, I can say, as before, you would be missing out.

But today I am not here to tell you about all the wonderful things you are missing if I say "Elizabeth Bennet" and you see Keira Knightley. I'm simply going to review, analyze and nit-pick this film until I am satisfied, and hope that the end result gives you a fair idea of what exactly I think of it. I think you may have a fair idea already.

If not, however, I hope that trailer set it a bit straighter for you. Yes, a deep-voiced announcer said "in a era" at the beginning. I can hardly believe it myself. But my favorite part has to be how they try to make you think Miss Darcy is Miss De Bourgh. Ha.

This film starts out very well. Beautiful cinematography paired with some equally fine music goes on pleasantly for a good while, and all is well until Knightley's poor posture and odd hair makes a bold appearance and ruins the serenity. And the nagging feeling of there being something terribly wrong never goes away. Five minutes in I get a horrible desperate feeling that the movie is going by way too fast.


I'm afraid that there is very little middle ground here for me. I either think a part is surprisingly good, or intolerably bad -- and I really mean intolerably. Director Joe "Anything-But" Wright makes a large number of changes and additions. Some are blatantly disrespectful of Austen's novel, and appear to have only been made for the sole purpose of making his film obviously different from the source. Some are just plain stupid, and ALL are unnecessary.

An example, because I can't resist: After Mr. Darcy proposes to Lizzy the first time... in the rain... and they've just finished insulting each other, he steps in closer... and they nearly kiss. (Excuse me for moment whilst I give back my breakfast.) I will not insult anyone's intelligence by explaining why that is... is... inconceivably ridiculous. If you can't understand, go read the book.


Joe Wright obviously has zero respect for Jane Austen. I could go on with this for hours, but I would only succeed in annoying myself. And, unfortunately, I have to give him some good credits too. Cinematography is his forte -- and his takes liberties in the story to show case it -- but if I judge it without bias, I can honestly say it's beautiful. And while he totally messed up casting the two leads (and skinny model and a "hunk") the supporting cast is impressive and very interesting.


Fun facts time! Jena Malone has been cast as Johanna Mason in Catching Fire, which will probably get her a lot of attention. This was Carey Mulligan's first movie, and has since catapulted herself into fame, and I'm confident she will continue to grow rapidly. And do you recognize Mary? Talulah Riley may not be a very big actress, but I doubt she escaped your notice in Inception.


These three girls barely got enough screen time to insure that fans would be able to tell them apart, but there are some really good and funny details to their characters that I love to see. Kitty (Mulligan) eying Mr. Wickham after he's married to Lydia; Mary, through expression, making it obvious that she would have married Mr. Collins; and Lydia's (Malone) "war of the wine glass" with Lizzy. (Inaccurate, but funny)

Rosamund Pike got a fair amount of screen time, and made the most of it by being lovely and sweet, and a very good Jane. Her suitor, Mr. Bingley, played by Simon Woods, was unfortunately ruined by script and direction. His best scene, and the only one where he doesn't act awkward or stupid, was apparently improvised. To really enjoy the actor, I recommend watching Cranford.


I shouldn't put it off any longer. Lizzy and Darcy -- Keira Knightley and Matthew MacFadyen -- the foundation of the story and therefore, the reason I don't like this version. I suppose it's a credit to their acting... that they're so awful... they obviously did exactly what Wright wanted them to do.


All the wonderful complexities of these characters don't even come close to making an appearance. The only thing MacFadyen has going for him is his ability to look serious and proud, and his deep voice; Knightley's is her ability to say all the old-fashioned lines and make them (more or less) sound like they come from her head. Neither look the part, but Knightley is by far the worst of the two. She's way to skinny, way too modern and way too glamorous -- which makes her much better suited for the roles she later took in Wright films, in Atonement and Anna Karenina. (Two movie better suited to his style as well, I believe.)


Speaking of Miss Bingley, I've decided that she is my favorite part of the film. So fashionable, so haughty, so jealous, and her character is not only played well by the lovely Kelly Reilly, but played as it should be. Right, not Wright. Oh, and the way she holds her mouth as they leave Netherfield is perfection.


Obviously, the director is the reason I don't like/respect/acknowledge this film as a Jane Austen adaptation. But I'm conflicted, because this is a beautifully shot film, that has some great and some practically brilliant intricacies and moments -- also the directors work. So what can I say, but that some of this movie makes me sick, and some makes me laugh out loud? I wish I could say one or the other -- be free to hate or love this movie in peace -- but, sadly, I cannot.

Now I will attempt to give a star rating to this confusing, conflicting film. It boils down to this: as a adaptation of Austen's novel, it's inaccuracies, and disrespectful changes, 1 star would be generous; disregarding all that, just as a film, I could give it 4 with no problem. So here is my compromise...