You've seen the 2014 Godzilla, that took the classic campy monster and turned him into a serious and dimly-lit force of nature; then focused the lens down to the earth, not to watch the destruction, but to see how the human characters react.

You've seen the 2017 Kong: Skull Island—the bombastic and gleefully explosive adventure romp with a cast full to the brim with A-list actors and an enlarged King that packed an entertaining action punch.

And you've seen the 2019 sequel to the former, Godzilla: King of the Monsters, where the dark and the seriousness remains but any semblance of interesting or even memorable characters are gone.

Now. Get ready... for the series to be degraded even further by pitting the two epic beasts against each other as the finalists in a literal knockout tournament, complete with brackets showing their progress in defeating Skull Crawlers and Hydra monsters in single elimination on their way to the top. 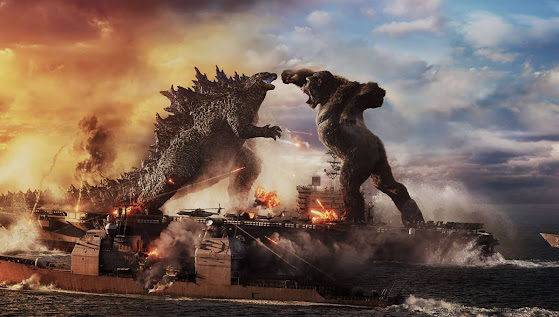 If that sounds like the direction you were hoping this "Monsterverse" franchise would take, quit reading and watch the movie. It's for you. If you were hoping that this mashup would contain even a single drop of respect for its predecessors, or human characters worth rooting for (let alone learning the names of) or a plot that tries to make sense, or fight scenes that hold more substance than CGI is capable of... you're as out of luck as this movie is out of a worthy bone in its massive, lazy body.

Its worst offense in my book is the tone-deaf way in which it attempts to borrow from the extremely stylish Skull Island. King of the Monsters already did away with 2014's Godzilla's grounded sensibilities and that was left to lie in its discarded grave. But people still like Jordan Vogt-Roberts' use of color and fun classic tunes, so that's what this movie gives us—just sans the purpose that drove Vogt-Roberts's epic choices. There's music. But its applied meaninglessly, ignorantly splashing it against the giant monkey whenever it can't think of anything else to do. Bright colors are even more used. And while I thank copycat mentality for making it more colorful and not less, it might as well have been black and white for all the good it did. 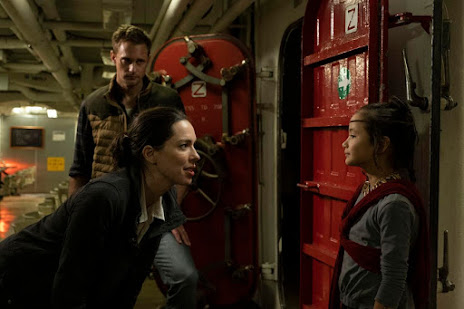 I felt so sorry for the human actors in this. Kyle Chandler was wasted as the lead in the last film; here he gets 5 short scenes out of obligation. Meanwhile the ostensible new lead, played by Alexander Skarsgård, is treated the same way as his predecessor. I remember someone saying his name near the end of the film and realizing I'd not heard it until then. He serves to set the plot in motion, then as a reactionary sign from whom the audience is meant to take their cues. He, Rebecca Hall, Eiza Gonzáles, and the cute little girl spent the film sitting inside the cockpit of a magical ship, gasping and staring at what is clearly nothing before their eyes. How frustrating a shoot it must have been.

There's a bit at the beginning that explains how Main Character's brother died going into the Hollow Earth, leaving Main Character on the too-careful side. The cute little girl and her mom agree that he's a coward and I figured he was meant to have an arc that culminates in a redemptive moment of bravery. But he was the one who pushed to take the risk of moving Kong to the Hollow Earth in the first place. And while he looks constantly nervous and timid, the movie never allows that to become a flaw. He risks himself for others and to further the plot easily—because the movie doesn't have time to spend on things like arcs or consistency.

The movie has no time, or interest, in thinking about anything. It needs a way to get people into the Hollow Earth, so magical flying ships are already made, with no explanation to the science that makes them look like they were plucked from a Star Wars film. On the way down there's a weird scifi portal that's a hassle to travel through. So much so that going back up, the portal no longer exists. Too much trouble. Why think of an explanation when dedicated fans can explain for you? Why put in effort when the cash will come in without it just as easily? 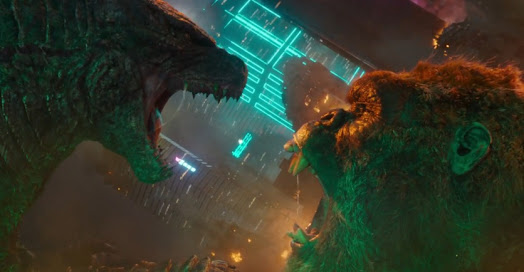 There's one exception to the movie's aversion to thought, (a spoiler so I won't go in depth) and it was the only part of the movie that didn't seem to actively rip brain cells from my brain. Beside this one part that explains an impossible science and ties back to the last film, the movie doesn't even turn off its brain; rather, its brain doesn't exist. And it demands you leave yours at home as well. I wouldn't care so much—who am I to get in the way of people's mindless entrainment—except that Skull Island and 2014's Godzilla both were far more entraining, while keeping their brain intact and in use.

The movie knows that it doesn't need any of the things it lacks. Sense, story, characters with names... it's all moot. Godzilla and King Kong punch each other in the face, and roar, and destroy buildings. It knows that's all it needed to earn attention and accolades. I despise this film. It was bad—but not just bad. It was carelessly bad. Confidently bad. It took the easiest path to shallowest success, and what frustrates me most is that its smug, lazy judgment of audience's tolerance was correct.