The Outfit is a movie set in the 1950's, inside a single tailor shop, where the bad guys are mobsters, and no one can be trusted, and it stars Mark Rylance, Johnny Flynn, Zoey Deutch, and Dylan O'Brien, which reads to me more like a fantasy football lineup for movie stars than a cast list that would ever actually happen. And yet—somehow—it misses the mark on feeling like a film that was made just for me.

I can't say that makes it a bad film at all though. Far from it. It has a concise and thought-out structure to it that gives it a very intentional feel. Much like the suit that Mark Rylance's character cuts and sews throughout the story. It treats filmmaking as a structured craft more than a freeform art, and the tone that sets goes well with a plot set inside a tailor's shop. It has strong bookends, gently interwoven themes, and conversations that are deliciously subtextual and often subtly intense. And despite its neat structure, it does many things that you won't expect, that turn the plot into new and interesting directions. The overall picture is as neat and trim as a new suit.

And yet... when you look closer, things begin to, shall we say, unravel. Some of the twists and turns may feel so completely unexpected because they couldn't reasonably happen in reality. In small things, only ever little details, the writing skirts by, making important plot changes happen on the flimsiest of foundations. Sometimes characters will tell lies that make no sense at all, yet the characters being lied to buy it without question. We the audience might notice at first but then be lulled back into the story by the character's belief, or another lie or another twist that makes us forget the last one. On and on it goes until it neatly wraps up the ending and hopes you won't remember the skimping that happened in the middle. 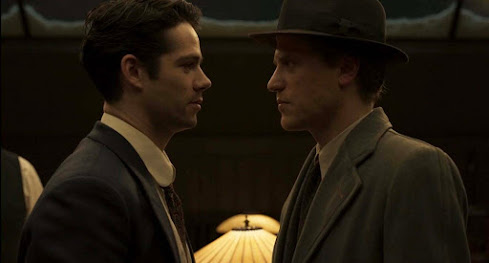 And as much as I enjoyed the conversation-heavy thriller aspect, and as much as I generally go for single-location stories, those things here often felt to be a waste of the cast's talent. They do a lot—particularly Mark Rylance in the lead—but never reach a point where the roles seem to be a challenge. The learning and dedication required for Rylance to become a convincing "cutter" (as he calls himself) seems like a normal Tuesday for him. Same for Johnny Flynn's underperformed and cool villainy. Same for Zoey Deutch's sweet, but tough, but sweet, but tough receptionist. Same for Dylan O'Brien's tendency to lean into the physicality of his roles. I'm a fan of all four, particularly Rylance and O'Brien, so seeing a film that exists to highlight performance keep them to this "comfort zone" was a little disappointing. But maybe that's not fair of me.

I think at the bottom of this mystery, the disconnect I feel with it is in the plot itself. Perhaps a little in the skimping of plot turns, but mostly in the turns themselves, that took the story further and further from where I wanted it to go. Maybe it's not fair to claim this as a complaint either, or maybe the story really would have served itself better by taking more predictable but more manageable turns. Regardless, the craft is undeniable, often fascinating, and worth a look.

The phenomenon of Top Gun: Maverick isn't that it's an exceptionally good high quality summer blockbuster—it's simply that high quality summer blockbusters haven't existed for about five years. (And even then they were a dying breed.) Likewise, the magic of Top Gun: Maverick isn't that it's the greatest gap-sequel ever made—it's more that no other sequel made so many years later has ever been able to boast of having a worthy reason to exist.

And yet here we are, our socks knocked off by another one of Tom Cruise's filmmaking efforts. He may be the last person making movies who actually cares whether his products are entertaining or not. Here, he returns as his original character, Pete Mitchell, callsign Maverick, assigned back to Top Gun to train an elite batch of aviators for a specific, daring, and possibly deadly mission. One candidate, callsign Rooster (Miles Teller) is the son of Maverick's old co-pilot who died in the first movie, and tension rises between them as Maverick struggles between his job of picking the best team to risk their lives on the mission, and his own personal mission of protecting his friend's son.

It's a pretty sweet set up, ripe for drama, but not so complex as to take away time from the entertainment of training exercises, which range from aerial dogfights to playing football on the beach. For a side plot, Maverick takes up a romance with a former flame, Jennifer Connelly, and before you know it, I was wishing Tom Cruise wasn't in the movie so much—because the one thing left unfulfilled is the dynamics between the candidates. The loose definition of their unique personalities made me wish for more. And then Hangman, the Iceman equivalent, and his antagonistic relationship with Rooster is rendered pointless by Rooster's more convincing antagonistic relationship to Maverick—but even that is put on hold for too long. When it comes due is when the movie starts to really shine.

I would have liked the movie to split time between Maverick's antics and what the candidates are up to when he's not around, but at the same time I get it. It's the Tom Cruise show because the film wouldn't exist without him. You can't begrudge him taking the spotlight, or deny that everything he does is entertaining. I just can't help but wonder if it would have been better had it been more balanced. Just a tad. In that light, it was the third act that sold the film for me. When everything comes to a head, and it starts to feel like an equal character match-up between Maverick and Rooster. This section also has most of the thrilling flying action (on which a Tom Cruise movie will never, ever skimp) and the most real stakes and tension as they take on the deadly mission.

The whole movie builds to this point, and it doesn't disappoint in any aspect. It has the realness that Cruise is known for to make you feel it—the thrill that can only come when there's also a notable lack of CGI. I got a big kick out of seeing the actors react while inside actual, actually flying fighter jets. And because everything was set up previously, the whole act is a neat series of payoff after payoff after payoff, each one more satisfying and rewarding than the last. Character drama and fun action mix together to splendid results, and an old-fashioned magic of storytelling comes to life. It's all so simple and won me over so easily that I wonder how the art was ever lost in the first place. 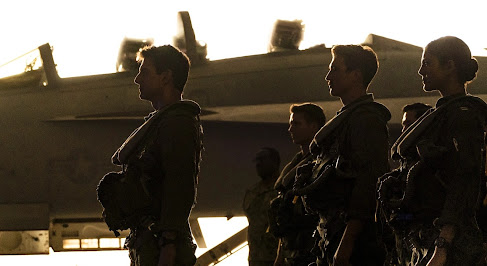 So, if Top Gun: Maverick is great and a phenomenon just because every other modern film is bad and worthless, that doesn't change the fact. It has the magic, and it is a phenomenon. It's dastardly entertaining in ways I thought films had forgotten to be. Not exceptional in the big picture, but certainly exceptional for its time. My hope is this: that this rare blockbuster isn't a throwback to good and entertaining movies at all—but the instigator of a resurgence.
Posted by Sarah at 12:18 PM No comments: