Rules:
1.) List 5 of your favorite male characters (book or screen)
2.) Tagging other people is optional
3.) If you are tagged link back to the person that tagged you
4.) Link back to Revealed In Time (preferably using the link to this post)

Thanks again to Ivy Miranda -- who also hosted the 5 Female Characters Tag a while back -- for tagging me in this! I had a bit of a harder time with this one in general, because I have more favorite male characters than female. In the end, I decided to feature a character in each category who has recently impressed me with his greatness. Here they are: 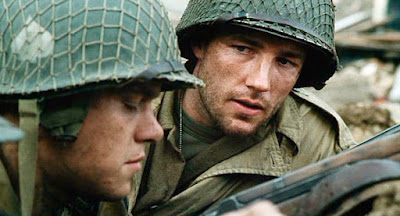 Basically, if I really like a character, I consider him to be a hero is some way. I could feature almost any of my favorite characters here. I picked Private Reiben from Saving Private Ryan, because he is the hero who was most recently introduced to me. (Yes, I only just recently saw Saving Private Ryan for the first time.) Reiben starts out as quite the antagonist (though not villain) in the movie, being irritable and careless and callous, and resentful to Ryan for getting special treatment, but every great hero needs an origin story, and Reiben's was my favorite part of the fantastic movie. He jumped out at me as an early favorite by looking and sounding like Edward Burns, kept the attention by being the source of much dramatic conflict, and eventually made an undeniable and moving turn to the heroic. The moment pictured above was my favorite: while waiting for the battle, Reiben watches Ryan, and you can SEE him change his mind about hating him. By the end I was very impressed, and glad for arbitrarily choosing such a great character with such a unexpectedly great heroic journey to invest in. 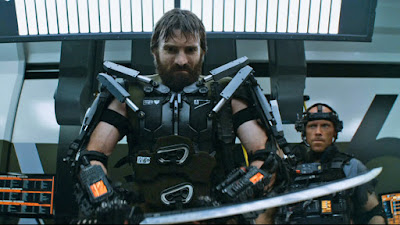 Strangely, this was the hardest category for me to make a choice in with trying to include only my most recent favorites in all the categories. After way too much thought, I discovered that I haven't been too keen on any villains recently. But a little more thought brought me around to Kruger, from Elysium. Kruger is a villain to the core; a gleeful embodiment of a guy who just loves being bad. Occasionally terrifying, surprisingly often very funny; epic South African accent; all thanks to the delightful Sharlto Copley. What I love most about Kruger is his fun-loving, laid-back attitude. He seems to put style above all else and relishes his villainous position. This guy makes evil look cool, and overshadows everyone else who appears in this movie. Even Matt Damon -- and that's saying a lot. 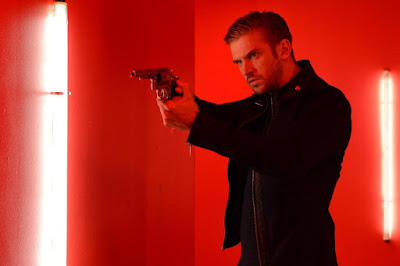 Anti-hero:
David
played by Dan Stevens
in The Guest

With this category I was very tempted to pick a character that I mainly consider to be a hero, just with one or two flaws that are cleared up by the end. The definition of an anti-hero is a protagonist who lacks heroic qualities so I would have been within my rights, but instead I decided to go to the opposite side of the spectrum, and that landed David from The Guest in this place. David is certainly the protagonist of The Guest. Interestingly, he is also the villain, and confusingly, he is for the most part, well-meaning in his villainy, making him a perfect, complicated anti-hero. Dan Stevens' performance of this strange and crazy character, is so incredibly perfect that I was literally laughing at his awesomeness many, many times. The balance of creepy and charming is still mind-blowing to me, and his expression changes are to die for. 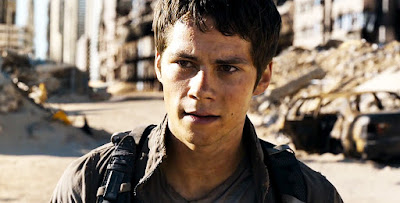 Best book-to-screen adaptation:
Thomas
played by Dylan O'Brien
in The Maze Runner, and The Scorch Trials

The Maze Runner series has just passed The Hunger Games as my favorite YA Dystopian series with the second movie installment, The Scorch Trials, in which Dylan O'Brien plays the hero, Thomas. In the books, Thomas never bothered me, but neither did I really ever feel particularly sympathetic towards him or get involved in his personal plights. O'Brien's performance of him in the first movie was very good adapting work, as he was obviously Thomas, with no real character changes, while actually improving on the character's likability. In The Scorch Trials he continued that trend, and is now a really, very involving character. He's still not my favorite character in the series (I still like Newt and Minho better personally) but I do like him way better than I ever expected to -- all thanks to some super great adapting and acting work. 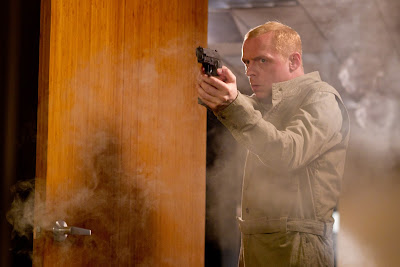 Best character perception:
Benji Dunn
played by Simon Pegg
in Mission: Impossible III, Ghost Protocol, and Rogue Nation
For this category, I easily decided on a Simon Pegg character. But then I had an incredibly hard time choosing between Benji Dunn of the Mission: Impossible franchise, and Shaun, of Shaun of the Dead. Characters who surprise you by being better than you originally thought is one of my all-time favorite things. It gets me ever time. I'm a total sucker for it. And it's something that Pegg does amazingly well. Benji won out simply because our changing perception of him took three movies (so far -- who knows what will happen next!) to get where we are now, and that's just awesome. Even though his brief appearance in M:I3 was hardly more than a cameo, the character was nailed immediately; as Benji earns his stripes by passing his field exam and going on missions with the legend Ethan Hunt, and eventually becoming his best friend, his base is always that nervous, geeky tech guy. But then we witness him beat a polygraph like it's no more than a slightly hard level on a video game, or passionately telling Ethan that he is perfectly willing to put his job and life on the line to help Ethan with an important but unsanctioned mission -- and we realize that Benji always was a lot more and a lot deeper than just the quirky comic relief.

I believe everyone I would tag for this has already been tagged, so I won't bother. But if you haven't been tagged yet and want to fill out his list, please do! I'd love to see your answers! What do you think of mine?