Guardians of the Galaxy

This review is spoiler-free!

The unstoppable force that is the Marvel film industry has yet again done what seemed impossible in theory, and through the hands of James Gunn, has given us a superhero epic so out there it is literally in the far reaches of space, yet so familiar and welcoming that you have laughed and cried and fallen in love even before the opening credits finish.

If you've seen the movie, I'm sure you understand what I mean. After that glorious grin-inducing moment that accompanied the film title, assuring that my highest hopes for this movie were, and would be fulfilled, I sat back, relaxed, and enjoyed the crazy awesome ride.


Meet Peter Quill, ADKA, (also debatably known as) Star-Lord, AKA, Mr. Everything-is-Awesome-Sauce himself, Chris Pratt, who is now suddenly and universally acknowledged as the greatest action-hero-with-a-sense-of-humor since Harrison Ford was young and pretty. Quill has the cool brood of Hawkeye, the care-free lifestyle of Tony Stark, and the heart of Captain America, but more than that, he has a exuberant style all his own that had me grinning from ear to ear from the moment the character made his debut. Pratt is extraordinarily perfect for the role, and not only because he can dance; he brings a laid-back charm and fun humor, retro-style sci-fi coolness, and just the right amount of underlying heart and heroism. Technically, Guardians is about all five Guardians, but understandably, the film really belongs to Star-Lord; the rest just follow his lead.


Gamora is green, but otherwise humanoid, but she more resembles a reptile than anything else. She's lean and lithe and agile, colder than a warm blooded creature has a right to be, and she might as well be covered in spiky scales with how often she lets anyone close to her. But it's all a front that she has built up over the years of a hard life, and underneath there is evidence of life waiting to be rekindled. Zoe Saldana is veteran actor of these types of movie, and this kind of character is her forte; she portrays every detail of her character with elegant ease -- even under all that makeup.


But her makeup is nothing compared to David Bautista as the huge, intimidating Drax. He is also green, but his entire ever-shirtless torso is covered in raised red markings. Pro wrestlers aren't exactly known for compelling acting skills, but there's few who could have pulled off this bizarre role as well and honestly as Bautista did, let alone other wrestlers. The Rock? Don't make me laugh. Drax has his own tragic past and a boiling rage as a product of it, but his way of speaking very literally and properly, like an ancient, solemn warrior makes a unique blend, and Bautista controls the balance with grace, and has some killer laugh lines.


Vin Diesel never gets to show his face, but does get a very interesting character to play in the form of Groot. He's a tree. A walking tree with four limbs and a dumb smile. But most limiting is the fact that everything he says is said using three words: "I," "am," and "Groot." If he opens his mouth to speak he always uses his entire vocabulary, and always in the same order -- shortest word to longest. So Diesel, you might think, doesn't have much to do at all, but you might be surprised at how expressive inflections can be, so, combined with some high quality CG effects, he makes a surprisingly sweet and endearing and understandable oaf out of a tangle of wood.


It doesn't seem possible, but Groot isn't even the strangest character of the group. That title belongs to Rocket, a raccoon who experimental cybergenetics has turned into a foul-mouthed little ball of fuzzy fury. Raccoons are already suspicious little characters, but when one has an unhealthy interest in explosives and big guns, and has the voice of Bradley Cooper coming out of him, things can get very strange very fast. But Cooper does a great job with the potentially tedious character. He's very often a source of snarky and smart-aleck-y wit, and has his humanized moments too, so we feel more of a connection to him than if he were just a cute but unusually dangerous furball.


Our main villain is Lee Pace as Ronan who towers over everyone in bright blue maleficence, and uses his epic deep voice to its full potential with power-crazed monologues that could have been terribly cheesy in any other less intimidating actor's hands. His hench-lady Nebula is Doctor Who's Karen Gillan, playing the creepy alien this time for an impressive change. There's no orange hair, or Scottish accent; she's only recognizable by her sarcastic attitude which is in fine form with an extra dose of bitterness in her character.


Typically for comedy, a moment is added with the sole purpose of being funny, so if it fails it's not only not funny, it's actually bad, with a pointless existence. With Guardians, the humor is a natural, inseparable part of the characters, and the story, and the ambiance of the whole film, so the "failure" of a joke never had a devastating effect, but every new successful, hilarious line or gag piled on the awesomeness. I also laughed a few times to relive the overwhelming glee from all the awesomeness.

And if there's one thing this movie just oozes with, it's awesomeness. It doesn't do anything halfway -- everything is given to us on a level that could easily overwhelm other aspects, but because everything is on that level, the movie instead soars to incredible heights. The look of the film is almost distinctly Marvel, except that it is almost exclusively set everywhere except Earth, and neither did anywhere conveniently look like Earth. The fullness of the space setting, creative sets, costumes, alien makeup, and the fantastic color scheme set this film as far away from others as it is set from them in distance.


The plot is the one thing you could maybe say was overwhelmed by the dazzling proportions of other things. I wouldn't though -- to me the simplicity of the storyline was refreshing, and it wasn't at all lazy or predictable. Even though it was simple, it was smart; no confusing plot twists, or mind numbing mysteries, but smart and witty, and straightforward, (but not without its share of subtlety or details) and a little rough around the edges. That last one might sound like a bad thing, but it's not really. I am a firm believer that a film's qualities should mirror its heroes', and if there's one thing all the Guardians are together, it's rough around the edges. Unpolished is the exact right consistency, allowing the fun off-the-cuff feel to lead where it may.

The defining aspect of this film though, hands down, is the soundtrack. There's just something about snazzy 70's pop songs playing in background of a full-fledged modern space adventure that defies my capacity for comprehension of its groovy magnificence. And as if its being magnificent wasn't enough, the music is in the movie; we listen along with the characters, and it draws us in closer to the story. It even holds an important place in the narrative and Quill's character. His attachment to the last remnant of his life on Earth -- a Walkman with a mix tape titled "Awesome Mix Vol 1." -- is oddly profound.


Now I can't very well review a Marvel film without mentioning the action. This isn't typical Marvel action though, because the biggest sequence is actually a spacecraft battle, which evokes thoughts of Star Wars more than a little, and is therefore a good thing, and also because our heroes aren't extremely super-powered, and usually fight like regular people (who are really good at fighting). Drax and Gamora are the best at hand to hand, but there's only one real hand to hand showdown, and it doesn't get much attention. Otherwise they just pummel people in neat ways. Rocket shoots and yells and Groot yells and grows wooden weapons. Interestingly, Quill is least lethal; though he can whack people with random objects with the best of them, his special weapon is diplomacy, which he uses to talk himself and others out of getting killed -- a skill that gets regular good use.


It's an overused word, but it applies so well, so I'm going to use it one more time, and bear in mind that I'm not using it lightly: Guardians of the Galaxy is an awesome movie. It has made a star (and Star-Lord) out of a charming goofball who couldn't deserve it more, and made serious, seriously lovable characters out of an angry raccoon and a communicatively challenged plant. It was involving and engaging throughout just by focusing on having fun, and inviting us to join in the adventurous party. The slick sci-fi and the retro are mixed to astonishing perfection. Never too serious, never too flippant. Brilliant comedy. Explosive adventure. Bursting heart. And obvious spoiler alert: the Guardians save the galaxy.

They went all the way; fooled around and I fell in love with their cherry daydream, but I'm not in love, it's even more -- it's an escape with spirit into the sky. They had their doubters, but now things are gonna get easier, cause we want them back, and there ain't no mountain high enough to keep them from coming and getting the love, because (ooga-chaka ooga ooga) I can't stop this feeling, deep inside of me... 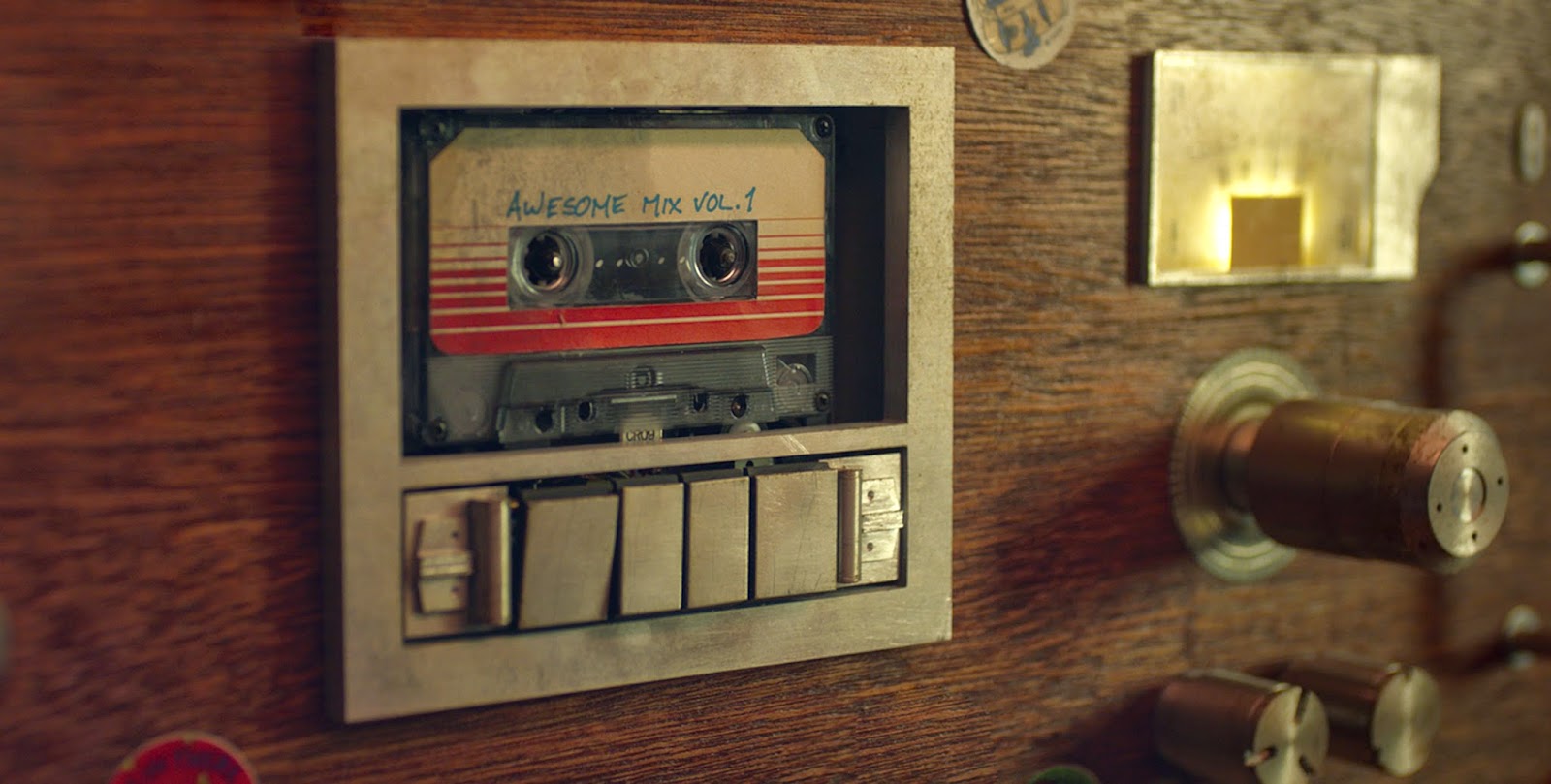