Since Northanger Abbey is the Austen novel I have most recently read, it is certainly my favorite. It is satirical perfection! But today I am here not to gush over the amazing wit and charm of the novel; I am supposed to be reviewing the 2007 film adaptation, which I now realize is a pretty difficult challenge. Hopefully, it will be less difficult than I imagine, and since I find it easy to talk about things that I love, I'll start there; with the cast.


Felicity Jones as Catherine, the young naive heroine is just as she should be. Her expressions and demeanor perfectly portray that innocent seventeen year old girl who imagines life to be like the Gothic-horror novels she reads, causing her to do and think some very stupid things, but, her sweetness and good-heartedness are portrayed equally well, and make her real and loveable. Comparing her to her book counterpart, I have no complaints whatsoever. Austen described her as, "when in good looks, pretty" so I'm inclined to think that Jones' absolutely adorable looks are a bit much, but one could argue that she's simply always in good looks, and to me that seems a perfectly acceptable explanation.


On to Henry. J J Feild plays Mr. Tilney, and also balances the character very well. His goofy, teasing side as well as his serious, instructing one equally qualifies him as an ideal hero, and a perfect match for the heroine. Though both are good, his teasing side is my personal favorite - he gets the full amount and best of Austen's cheerful wit, and even though Field never gets to say some of my favorite book lines of his, the ones he does say are great, and it's easy enough to read the excluded ones and imagine him saying them. And Mr. Tilney's book and movie versions match wonderfully - appearance-wise as well. I also love that Austen said he only begins to love Catherine because he knew she was partial to him. It isn't made obvious in the movie, but it's easy to assume when you know it. 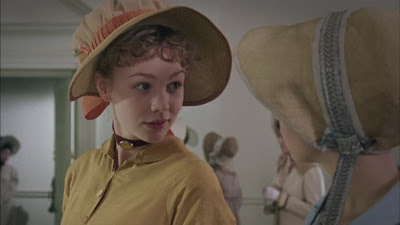 No matter how impressed I might be with those two main characters though, I will always be more impressed with Isabella Thorpe. Carey Mulligan is a brilliant actress and does a brilliant job with this conniving, falsely sweet character - so perfectly annoying, yet when Catherine says she feels sorry for her, somehow you do too. Mulligan is also gorgeous, and while her costumes might sometimes be a bit much, she looks every bit the part. Her last scene is great - her change of expressions as she begins to narrate her letter to Catherine says it all. I think this is the first film I noticed Mulligan in, and have yet to be unimpressed with her in anything since.


Thus concludes my favorite characters, but there are still a few left worth mentioning. James Morland (Hugh O'Conor) doesn't get much screen time, but take good advantage of what he gets. Eleanor Tilney, (Catherine Walker) is lovely and stylish and pleasing; Mrs. Allen (Sylvestra Le Touzel) is obsessed with her gowns, and amusing. Mr. Thorpe is extremely annoying and creepy, so, mission accomplished for William Beck. Captain Tilney makes me laugh with all his... swagger, and General Tilney is very scary - not quite handsome enough to match Austen's description, but his overall impression is intimidating, and that's close enough.

All that to say, the cast and their characterization of their particular characters is my favorite part of the film; you'd really have to start nit-picking to find any differences between film and book. Unfortunately, not so in other areas of the film, even in general plot points. Why, for instance, did they decide to just leave out the fact that eventually, General Tilney gave Henry and Catherine his consent to their marrying? And Catherine's parents wouldn't give their consent until he did? Perhaps because in the book a big factor to his giving the consent was in his discovering that Catherine was by no means poor - "Catherine would have three thousand pounds." says Austen, and this movie portrays her and her family as being rather poorer than that. I am also disappointed that we never get a look inside Mr. Tilney's house, and quite a bit more from her stay at Northanger is left out.


But what is truly annoying is the change that makes Catherine read The Monk, instead of just Udolpho, which causes a couple of inappropriate scenes. Also, at only a hour and a half, it's just too short, even for Austen's shortest novel.

Still, I love this movie. I love and enjoy the characters, and whenever something goes wrong, I just remember how it goes in the book. The book, of course, will always be my favorite version of the story, and that's the case with all of Austen's novels, but this film version is very well made, and perfectly cast, so I will continue to watch it, and enjoy what I enjoy, tolerate what I don't, and block out the rest.


There; not too difficult at all. I hope I have conveyed my impression intelligibly. If your conclusion after reading all that is that I find that the perfection of the cast and characters makes up for any imperfection elsewhere, (not that there is only imperfection elsewhere) you would be exactly right. And if it wasn't, well, I guess it is now.