The always sensational Joseph Gordon-Levitt is Wilee, a smart and nimble bike messenger in New York City. His bike has one gear and no brakes, but he apparently doesn’t actually have a death-wish, he just loves the rush of speeding though traffic and using his lightning-quick reflexes to not get killed. Of course, not getting killed is a lot easier when no is actually trying to kill you. Not that Michael Shannon as crooked cop Detective Monday is really trying to kill Wilee, he just wants the package he’s carrying. But Wilee is a stickler for the rules and loyal to his friend who gave him the package, and refuses to let Monday have it. The package must be either at its destination or in the hands of Monday at seven o’clock, and the time is now five-thirty. Let the hour-and-a-half chase through the streets of New York commence.

Yes, this movie is just an hour and a half, unusually short for an action flick these days, but in the end it didn't matter, because the story was put together right, and filled up the exact amount of time it needed. Perfect in length, with remarkable balance, it flies by with zero slow spots, but never rushes over anything too quickly. Every once in a while, a well-timed flash-back will fill you in a little bit more on the plot, which is by no means complicated, but I for one never took notice. I was way too busy watching Gordon-Levitt kicking butt at a break-neck pace, and enjoying every minute of it. 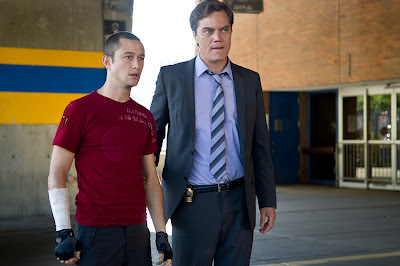 Gordon-Levitt was, of course, the reason I wanted to see this film, and it was a good reason; he always performs so well and this was no exception. But there is more worth watching to this film besides a good and compelling hero. For example, there are three more good-guy characters that get a chunk of screen time. Wilee’s girl, Vanessa, (Dania Ramirez) her roommate, and sender of the mysterious package Nima, (Jamie Chung) and Wilee and Vanessa’s co-worker Manny (Wole Parks) who barely makes the title “good guy” as he’s annoying and amazingly self-absorbed. They were good, without adding to, or detracting from the movie very much at all. Then there’s Michael Shannon, the bad guy, and he was a very good and creepy bad guy. A love-to-hate-him sort of fellow, and kept the tension up throughout the movie.
Action films are a dime a dozen, with their overly stylish, mostly unbelievable action sequences and stunts, and fiery explosions. They go way over the top, and yet we still sometimes manage to get bored watching them. I’m not going to say the action here is anything really new, lots of movies do have quality action after all, but I sure did enjoy it like it was new. Mostly, I think, because it was real, with no green screen and little special effects. It felt real, and it was refreshing, and exciting. And by "real" I don't mean "shaky and quick-cut." The director David Koepp kept the camera smooth, so every stunt is clear and enjoyable. Definitely action worth seeing, and good thing too, because the action never stops, so if it was lousy, the movie would be practically nonredeemable. 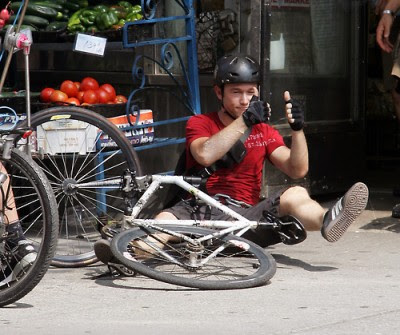 None of the elements in Premium Rush are very original. The most original being that our hero is a bike messenger, which probably hasn’t been used much because it just doesn’t seem like a great idea. But take the basic plot, all the usual action flick formula, and the one original element, and – this is the key – make it well, and you will end up with a good movie that is at its very least worth watching. A movie that doesn’t feel like it came out of a factory. Joseph Gordon-Levitt automatically raises the quality of any movie he’s in by at least 75%, but really he’s just icing on the cake; something that will tempt someone like me to see this non-factory-made movie. Still, Gordon-Levitt is my favorite part of the movie, but thanks to every other part being quality as well, I was satisfied that his abilities weren’t wasted on trash. Not without its flaws, but this film is what it claims to be; a non-stop from beginning to end, rip-roaring good time at the movies. Grab your helmet, and hold on tight.