The time has come for Jeremy Renner to establish his identity, and his supremacy, and, well, you know. Before, he would usually play second fiddle to the likes of Tom Cruise or Ben Affleck, but could this be the film that proclaims him a full-fledged Hollywood action hero with acting chops? Can he fill Matt Damon’s shoes? Is that a ridiculous question considering he doesn’t play Bourne in this Bourne film? (Yes.) Here’s a better question: can the filmmakers respect this franchise with all its newcomers and changes, and let them live up to their potential, or will they just suck money and heart out of it until it dies? If they were to go the respect way, they would have made the right choice, and unless Damon comes back for a Bourne/Cross team-up, they should do some serious title re-thinking.

So, the trailer is pretty cool, but it is also misleading in some mildly annoying ways, and shows off most of the best bits of the movie, and I found something better for you to watch instead; the Bourne theme song! I know, I know... enjoy.

Jason Bourne is wreaking havoc, doing his “Ultimatum” thing, and causing lots of trouble. More trouble than he even realizes. More secret programs are in danger than just Treadstone, and everyone is scrambling to try and minimize the damage. New to the films, but apparently not to the programs, Eric Byer (Edward Norton) takes charge, and decides that a program called Outcome needs to disappear. Meanwhile, Aaron Cross (Jeremy Renner) is performing an extreme looking training exercise in Alaska. He finishes in record time, then has a friendly chat with a much less talkative fellow agent. Then he almost gets blown up. He escapes though, and even tricks Byer and co. into believing he’s dead. But he’s got a problem; Outcome agents are experiments for physical and mental enhancement, and in order to keep their skills they need to regularly take medication. Aaron only has two doses left, and getting more is understandably difficult with the program being terminated and all. Luckily, there’s another survivor. Dr. Marta Shearing (Rachel Weisz) runs tests and experiments on the agents but is left mostly in the dark about the program. Still, she survives the termination/cover-up via massacre only barely. More assassins show up at her house later, but lucky for her that’s also where Aaron shows up on his quest for meds, and helps out in his traditional style. She needs him in order to live through another day, and he needs her in order to stay who he is, so they stick together. 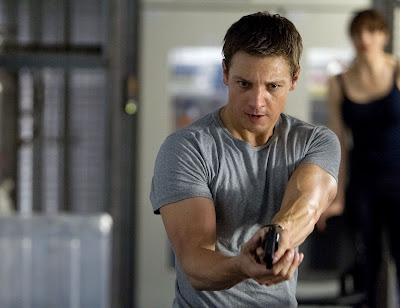 Edward Norton playing the bad guy was just fine and dandy as he usually is, but didn’t do very much besides talk, and Renner and Weisz worked well together. I’m looking forward to hopefully seeing more of them in a sequel. Renner, of course, can raise the quality of a movie just by being in it, but I never really thought of Weisz as a good actor before either so she rather impressed me. The normal-nice-guy-turned-super-assassin and ultra-smart and pretty scientist are original, cheer-able characters. And, as a plus, I found it very refreshing that by the end of the movie the characters already had a good relationship that was rooted in something more solid than romance.

So, I liked this movie, I really did, but a few little problems and missed opportunities irked me. Like the cinematography. And I know the previous Bourne movies had shaky and sometimes blurry quick-cut shots, but there's a fine line between that realistic shaky-cam edge, and not being able to tell what's going on. And by "fine line" I mean “incredibly obvious line”. I know it can add to the tension, and I suppose some people do like it, but I prefer to, you know, see. Fortunately it was ignorable most of the time. And missed opportunities left me wishing for deeper character development for Cross. Deep characters are pretty much Renner’s specialty after all, and he just felt underused… though underused for him is perfectly normal for anyone else. They apparently just tried to make another Bourne movie minus Bourne, and that's exactly what they did - way better than they had a right to, by the way - but the result wasn’t as great as it should've been, and had the potential to be, if they'd invested more in their new star. 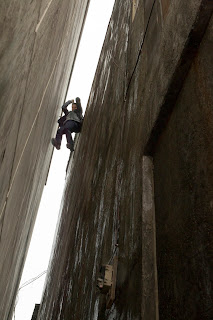 Yep, if it hadn't been for the name of Jason Bourne being mentioned in nearly every other scene I probably would've totally forgotten him, because Renner does his part as an awesome action hero extremely well; kicking butt, and saving the girl with style and likability. He excels at the action. Aaron runs, climbs, jumps, fights, and outsmarts the bad guys with epic ease. There are some jaw-dropping stunts that Renner performed himself, (he’s a one man army, taking Hollywood by storm) and the action sequences are original and exciting, well choreographed and – mostly – well filmed. I especially liked the tense sequence in Marta's house.

Quite enjoyable overall, exceptionally good at some points, yet crumbly in others, this movie is nothing if not inconsistent. Like a two hour long trailer, or a bridge, without a solid beginning or end, Legacy feels like it’s a well-done setup for what’s to come. So, should we be excited for the next installment? Well, while this film certainly could’ve been better, it also could've been way worse, and the potential for improvement is there, so I’m cautiously optimistic, and, may I say, excited for the next go around with our new “Bourne” hero. Fix a few problems, and put in a little more effort and care, and Aaron Cross can bring this franchise to fresh new heights… he doesn’t even need Bourne, or his legacy.

And ok, here's the trailer, in case you feel you must watch it.