Marvel's The Avengers. If you haven't heard of it, you've probably been living under a rock. Ever since the first Iron Man movie in 2008, we have been teased with the promise of this movie. Now, after four years, two Iron Man movies, two Hulk movies, (each with a different actor as the title character) and a movie each for Captain America and Thor, the Avengers have assembled. And what an assembly they make.

It was either amazingly brilliant, or unbelievably lucky when Joss Whedon was hired to script and direct this film. I'm going to give them the benefit of the doubt and say it was brilliance. Because it was. Whedon was creator and director of this little cult tv series called Firefly that was canceled after only 14 episodes, but was still so popular, he made a movie (Serenity) which was way more and better than just wrapping up the plot for all those loyal fans. When I heard Whedon was writing and directing the Avengers I knew it wouldn't be the mashed-up jumble full of miserably underdeveloped characters I was previously worried it might turn out to be. I saw Firefly/Serenity, so I know; Joss Whedon is king of ensemble casts. He successfully defined, developed, and meshed nine main characters in the tv show. "But," you might say, "The Avengers isn't a tv show, it's for the big screen!" Yes, a really big screen. It's gotta have lots of explosions. And fighting. And the using of amazing superpowers. And you can have all that, but it's not worth anything without a good script. A script with plot. Character development. Drama. Just cause it's a superhero movie doesn't mean it should be all pow, bang, and Hulk smash with corny lines. No worries. Whedon and co. deliver in all departments. 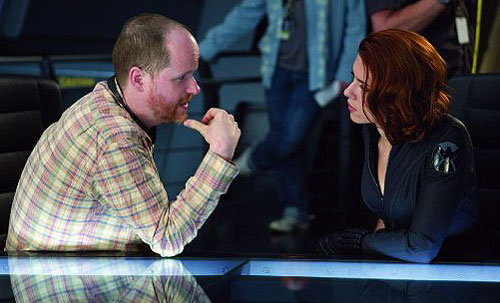 Some plot aspects from Captain America and Thor continues for this movie. Loki, (the ultimate of sneering baddies you'll just love to hate, played by Tom Hiddleston) Thor's brother comes to earth and steals the Tesseract (that blue cube that was on the bottom of the ocean at the end of Captain America) from the SHEILD base, giving him the power to summon an alien army to help him conquer the earth. This forces Nick Fury (Samuel L. Jackson) to restart... the Avengers initiative. And the avengers are...

Robert Downey Jr. As Tony Stark/Iron Man, Downey Jr. is as good as - or possibly better than - his solo outings. The hilarious script gives him his sarcastic, bone-dry one-liners, that he delivers with his signature style, but also remembers to give the character... well, character, even if he hides it most of the time. But Stark doesn't get all the good lines by any means...
Chris Hemsworth as Thor says the line I laughed the most at. Thor has matured since his last movie, making him a lot more likable. He feels responsible for his brother's evil deeds, and is the only one who doesn't need a kick-start from Fury to try and bring Loki to his senses, or justice.
Chris Evans is Steve Rogers/Captain America, who is still thawing and in culture shock from his 70-year slumber buried in ice. He's a natural born leader who holds on to his morals and ideals of his time. Which causes him to clash with Stark, and his loose, fly-by-the-seat-of-your-pants attitude. But he is not resentful, and helps Tony out when he needs to, even if he annoys him.
Mark Ruffalo as Dr. Bruce Banner/Hulk is the new guy, the third to tackle the role of the Hulk, too big (ha) for his two predecessors. Ruffalo slyly slips away with scene after scene, as the understated Dr. Banner, trying to keep his cool, and, once he loses it, gives suspense, terror, and then a bunch humor to his angry side, "the other guy."
Scarlett Johanson as Natasha Romanoff/Black Widow is more fleshed out than she was in her Iron Man 2 role, here she's more than just the obligatory hot girl in a leather suit. Her mysterious background is slightly more explained, but it only makes her all the more intriguing. Even without superpowers, Natasha can hold her own with, and be just as useful as the men. I wouldn't be surprised if she gets her own movie soon. Or maybe she can costar in a film with her assassin buddy...
Jeremy Renner. Renner plays Agent Clint Barton/Hawkeye, master at archery. He had a small cameo in Thor that anyone who didn't know of the upcoming Avengers would've missed. But he's just as important as the rest of them, both in terms of adding to the plot, and adding to the group in general. Unfortunately, his adding to the plot subtracts from his screen time, but gives his character more depth later, which almost makes up for it. Renner is a great actor, who's been nominated for two Oscars, and plays Barton in a ultra cool Bourne sort of way, (he's staring in The Bourne Legacy this summer) and makes me wish he had more screen time. I guess I'll just have to wait for Avengers 2. 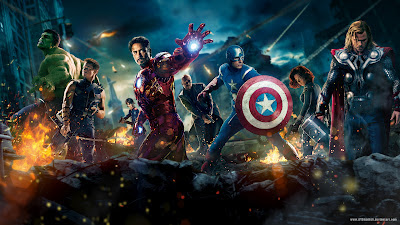 You've probably by now got a good sense of what I thought of the script, but let me just add that it was truly funny. I don't often laugh out loud at movies, but this had as many good laughs as almost any comedy I've seen. And the action sequences - there's a lot of them - had all the pow, bang, and yes, Hulk smashing you'd ever want, all the while staying comprehensible and involving. The plot is perhaps a tad simple, just an excuse to fight, but this is, after all, a superhero movie. Don't worry. Certain giant flying aliens crashing through skyscrapers may be slightly reminiscent of Decepticons, but Transformers this is certainly not. The Avengers is how Transformers should have been; blowing you away with dazzling action sequences, cheer-able moments, and a truly fun movie experience.

The Avengers flew away with $200M this weekend, completely shattering records, and nothing could be more deserving. This is an action-packed, visual feast of a superhero pic with heart... and a brain. A real blockbuster. And easily the best two-and-a-half hours I have ever spent in a movie theater. Avengers Assemble!
-5/5 Stars
Posted by Sarah at 8:30 AM